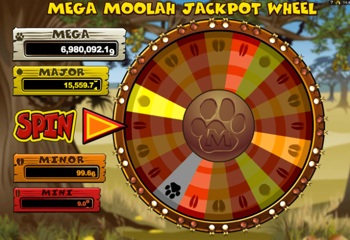 It is not the first time that the Mega Moolah progressive slot has paid out a huge win. Ever since the slot first paid out its initial jackpot winner back in 2008, Microgaming has continued to pay out wins at a regular rate, with total payouts now of over 505 million euros.

The largest of those payouts came back in October 2015, when UK-based former soldier Jon Heywood landed a world record win on an online progressive jackpot game when he pocketed a cool £13.2 million jackpot win (just shy of 18€ million) which was confirmed as being the largest ever jackpot win in history by the Guinness Book of Records.

That won't be of any concern to the latest winner however, who won the jackpot on Friday 8th April 2016 playing at the popular Spin Palace Casino, one of the casino's part of the extensive Microgaming Network which hosts the "Millionaire Maker" slot.

After playing a little while at Spin Palace, the player saw the randomly accessed bonus wheel game, the key to winning the jackpot, activated. However, they would have been stunned to see that the wheel spun around and selected that of the four jackpots available to be won, Micro, Mini, Major and Mega, it would be the massive Mega progressive that the player would be pocketing.

As with all Mega Moolah progressive payouts, the player will receive his win in a single lump sum, although where the player is based and any details about the individual are as yet sketchy. The lucky player has decided to remain anonymous rather than go public with news of the massive win.

After news of the win at their Casino broke, Spin Palace executives were quick to confirm that the jackpot had indeed won and offered their hearty congratulations to the lucky player.

"It is always an incredible feeling to have one of our players become an instant millionaire," read the statement.

"On behalf of everyone at Spin Palace, [we offer] a massive congratulations to our winning player on their near 7€ million fortune."

Of course, with Mega Moolah being the brainchild of the developers at Microgaming, the company are always delighted to hear when a customer at one of their affiliate casinos hits the big prizes and the Head of Casinos at Microgaming John Quinn was quick to add his congratulations to that of the casino.

"It's not long since we were celebrating our historic and record-breaking win. To be able to crown another millionaire so soon after another brilliant win. Congratulations to the lucky Spin Palace player!"

The Spin Palace casino was founded way back in 2001 well before Mega Moolah hit the virtual casino floors and has produced decent sized winners on a daily basis since. Stocking a wide range of over 600 Microgaming-developed casino games, you can join the Casino now and claim up to $1,000 free in Matched Bonuses on your first 3 deposits. Click here now.

In terms of the Mega Moolah slot, after the huge win was triggered on the 8th April, the progressive fund reverts back to the base currency seeding amount of £1 million, and as players play the slot, the progressive will continue to grow until the fund is triggered again.

April's win was the first time in 2016 that the jackpot was won. It was triggered twice in 2015, in October with the record win mentioned earlier in the article and also, coincidentally, in April 2015 when an unnamed Canadian player took home a jackpot of around CA$7.5 million.

Don't fall into the trap of the old gamblers fallacy of thinking that because the Mega Moolah progressive jackpot has been won, that it will not be won again for many months. Back in 2013, the jackpot was won an incredible six times, including once per month from September through to December and back in 2012, the jackpot was won five times, including a £5.8 million win form Lincolnshire based slots fan John Orchard.

The jackpot has already climbed to around 5.6€ million since the last time the jackpot was triggered and as the Mega Moolah jackpot continues to grow, there will be an ever willing number of players from around the globe loading the game up to see if they could be the next lucky jackpot winner.

All Online Progressive Jackpot Winners - Index of the winner reports.